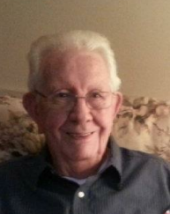 Carl William Holzer, 92, of Indianapolis passed away on Thursday January 12, 2017 surrounded by loved ones. Born on June 20, 1924, he was the son of Ignatius and Emma Holzer. After high school, Carl entered the United States Army and served in the South Pacific during World War II. Carl then returned to Indianapolis and worked for Eli Lilly until his retirement in 1989. Carl was a devout member of St. Roch Catholic Church, a longtime fan of the Chicago Cubs, and loved doing crossword puzzles. He is preceded in death by his beloved wife, Lois, to whom he was married for 57 years; his parents; and his brothers, Norbert and Bernard. He is survived by his daughter, Cindy (Kurt) Newhouse; sister, Betty McElroy; and granddaughter, Kacie (Caleb) Schlegel. Donations can be made in his name to St. Roch Catholic Church or The National Parkinson Foundation. Visitation will be Monday, January 16, 2017 from 11 a.m. until 1 p.m. in Daniel F. O'Riley Funeral Home. Funeral services will follow at 1:30 p.m. in Calvary Cemetery Mausoleum Chapel. Online condolences may be shared with the family at orileyfuneralhome.com.

To order memorial trees or send flowers to the family in memory of Carl W. Holzer, please visit our flower store.