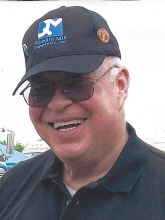 Charles R. "Rick" Commons, 71, Indianapolis, passed away Saturday, July 9, 2016. He was born in Indianapolis on October 14, 1944 to Charles Patrick and Marguerite A. O'Donnell Commons. Rick was a 1962 graduate of Southport High School and earned his Bachelor of Science Degree in Engineering from Purdue University. While in high school, Rick participated in the Junior Olympics as a swimmer. He worked as a Sales Engineer for Quality Mill Supply Co. Inc. in Franklin, IN for 45 years. Rick was a member of St. Barnabas Catholic Church, Knights of Columbus Council 3660 where he served on the House Committee, and the Bishop Chatard Assembly 4th Degree Knights of Columbus. He was a co-founder of the Wishing Well Fund, Inc. in 1972, and was awarded the title of Kentucky Colonel by the then Governor of Kentucky, Paul E. Patton. Rick was preceded in death by his parents; wife, Carol Ann Ladd Commons; and his son, Charles R. "Ricky" Commons II. He is survived by his daughter, DeeAnn Commons. Visitation will be Wednesday, July 13, 2016 from 4 p.m. until 8 p.m. in Daniel F. O'Riley Funeral Home. A Mass of Christian Burial will be celebrated on Thursday at 11 a.m. in St. Barnabas Catholic Church with calling at the church prior to Mass beginning at 10 a.m. Memorial contributions are requested to the Wishing Well Fund, 846 Gazebo Way, Greenwood, IN 46142. Online condolences may be shared with the family at orileyfuneralhome.com.

To order memorial trees or send flowers to the family in memory of Charles R. 'Rick' Commons, please visit our flower store.