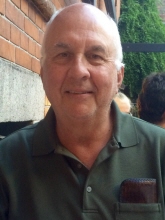 David A. Heise, 68, of Indianapolis, passed away peacefully on February 8, 2017 with his loving family by his side. He is survived by his wife of 47 years Patricia Joyce (Wingfield), son, David Edward (Stacy), daughter, Shannon Marie (Charles), son, Jonathan Martin (fiance Sara) and six grandchildren: Foster (18), Evan (16), Colin (13), Cayden (9), Brandon (11), and Isaiah (6). David is also survived by two brothers, four sisters, and numerous nephews and nieces. He is preceded in death by his father, Arnold G. Heise; mother, Mary B. (Gloekler) Heise; and step-mother, Nina C. Heise.
David was born in Erie, PA and at the age of five his family moved to Louisville, KY. He graduated from Trinity High School (1966), earned a BS in Chemical Engineering from the University of Notre Dame (1970), and an MBA from Indiana University (1977). David was a veteran of the United States Army Reserves. He spent his entire professional career, thirty-six years, at Eli Lilly and Company based out of Indianapolis. He served his community faithfully as a former member and president of the Perry Township Kiwanis club, a dedicated volunteer at the Hunger Inc food pantry, and a committed parishioner of St. Barnabas Church.
His passions included: his deep faith in God, his loving family and grandchildren, golfing with his dear friends, travel, and Notre Dame and Colts football. All his life, he was a friend to many and will be missed for his giving nature, warm personality, and uplifting spirit.
Visitation will be held on Monday, February 13, 2017, 3 to 8 p.m., at Daniel F. O'Riley Funeral Home, 6107 S. East St. (South US 31). Recitation of the rosary will be at 7:30 p.m. The Mass of Christian Burial will begin at 10 a.m., Tuesday, February 14, 2017, in St. Barnabas Catholic Church. Prayers will begin at 9:30 a.m. at the funeral home. Interment will be in Calvary Cemetery.
The family requests donations be made to Saint Barnabas Church, the University of Notre Dame, Saint Meinrad Seminary, or the Franciscan Health Hospice House in lieu of flowers.
Matthew 25:23 His master said to him, ‘Well done, good and faithful servant. You have been faithful over a little; I will set you over much. Enter into the joy of your master.’
Caring faithful servant, dedicated father, brother, grandfather, and friend.
www.OrileyFuneralHome.com

To order memorial trees or send flowers to the family in memory of David A. Heise, please visit our flower store.