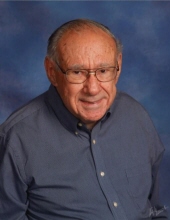 Donald G. Courteau was an architect and devoted husband and father. He was born on August 18th, 1936 the eldest of three boys to Henry Courteau and Angela Greer Courteau in Escanaba, Michigan. In an orderly fashion, true to his character until the end, he died peacefully in his home 84 years later, to the day, on August 18th, 2020.

An earnest and committed man, he married Patricia E. Courteau, his high school sweetheart, on June 8th,1957 at age 20. They were married for 58 years before she died in 2015. He graduated from the University of Illinois where he earned a Master of Architecture degree. And following university he spent two years in Fort Leonard Wood in military service before moving to Indianapolis to raise a family and practice as an architect for 56 years. He received numerous awards throughout his career for his dedication to the craft and utility of his trade.

He was an active member of Saint Mark Church and Knights of Columbus Council 3660 and enjoyed fishing, cooking, reading and playing with his numerous dogs throughout the years. He is survived by his two adopted children: daughter Kate Courteau and his son Kevin Courteau and his 3 grandchildren, 9 great-grandchildren and his wheaten terrier pup, Darby. He is preceded in death by his parents, his wife Patricia and his younger brothers, Richard Courteau and James Courteau.

A mass celebrating his life will take place on Friday August 28th at 12 noon at Saint Mark Church, followed by an outdoor ice cream social at his home until 6pm. In lieu of flowers, memorial contributions can be made to the Richard L. Roudebush VA Medical Center, in honor of all those who have fought for our freedom; especially honoring his brother James, a Vietnam Veteran and his lifelong friend Joe H. Shaw, a POW during WWII. On August 18th, 2020 Donald was escorted by angels into his next life. May he rest there in peace while his pup Darby runs free on the beaches and headland trails of Northern California.

To order memorial trees or send flowers to the family in memory of Donald G. Courteau, please visit our flower store.