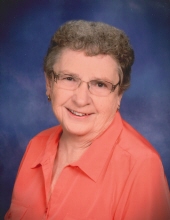 JoEllen Forestal, 85, of Indianapolis, passed away in the early morning hours of July 18, 2019 surrounded by her loving family. JoEllen was born on June 25, 1934 to the late Joseph and Leona (Brackman) Werner. On June 8, 1957 in Little Flower Catholic Church JoEllen was united in marriage to the late Richard F. Forestal.

A woman of faith, JoEllen was a member of St. Mark Catholic Church. JoEllen was known to be an excellent Bridge player. Above all, JoEllen was a devoted wife and mother who cared greatly for her family.

JoEllen’s family would like to extend a special thank you to the Five Star Residences of Banta Pointe for the exemplary care they provided JoEllen during her stay there.

Along with her parents and late husband, JoEllen is also preceded in death by her siblings, Austin, Donald, and Jacqueline Werner.

Family and friends will gather to celebrate JoEllen’s life on Monday, July 22, 2019 from 4:00 P.M. until 8:00 P.M. at the Daniel F. O’Riley Funeral Home, 6107 South East Street, Indianapolis with recitation of the Rosary beginning at 7:30 P.M. Morning prayers will begin at 10:15 A.M., on Tuesday, July 23, 2019 at the funeral home with the Mass of Christian Burial beginning at 10:30 A.M. at St. Mark Catholic Church, 535 East Edgewood Avenue, Indianapolis. Burial will follow in Washington Park East Cemetery, Indianapolis. Please visit www.OrileyFuneralHome.com where you may express online condolences to JoEllen’s family.

To order memorial trees or send flowers to the family in memory of JoEllen Forestal, please visit our flower store.