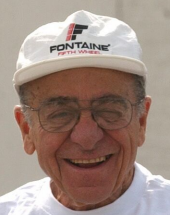 Joseph P. Morone, Jr., 92, Carmel, passed away Tuesday, November 15, 2016. He was born in Indianapolis on December 12, 1923 to Joseph P. and Margaret Genco Morone. Joseph served as a radio operator in the US Army during WWII. He graduated from Purdue and Butler Universities and was employed as an electrical engineer for P.R. Mallory for 25 years before working as an acquisition and merger business consultant. He had been an active member and volunteer at St. Mark Catholic Church for many years. He served as past president of the Archdiocese of Indianapolis School Board, was a member of the Adult Day Care Advisory Council for Catholic Social Services, was a member of the Indianapolis Moonwatchers and built his own telescope and was a patent-awarded engineer. Joseph loved his Boston Terriers and was a devoted husband and caregiver. He was preceded in death by his wife, Mary Alice Koesters Morone and daughter, Mary Ann. He is survived by his children, Michael (Sheila) Morone, Tom (Becky) Morone, Judy (Steve) Harrison, Teresa "Terri" (John) Hupalo; 8 grandchildren; 9 great grandchildren. A Mass of Christian Burial will be celebrated on Saturday, November 19, 2016 at 10 a.m. in St. Mark Catholic Church. Visitation will be Friday from 4 p.m. until 8 p.m. with a Rosary at 7 :30 p.m. in Daniel F. O'Riley Funeral Home where prayers will be said on Saturday at 9:30 a.m. prior to Mass. Burial will be in St. Joseph Cemetery. In lieu of flowers, memorial contributions are requested to Catholic Charities Indianapolis. Online condolences may be shared with the family at orileyfuneralhome.com. The family would like to thank the staff of Sanders Glen for their compassionate care of Joseph over the last four years.

To order memorial trees or send flowers to the family in memory of Joseph P. Morone, Jr., please visit our flower store.