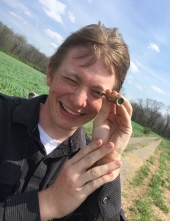 As a family, we have chosen to honor Justice’s wish of not having a funeral service; however, we wanted to create this site so that those that love Justice, or love members of his family, can come to this site and express themselves.

This site is meant to be a place to share your thoughts, feelings, memories, and express yourself both in regard to Justice or to a member of his family. Justice was clear that he did not want a funeral, nor did he want an occasion that would be filled with sadness, weeping, or mourning. Those that know Justice well know that he was always drawn to comedy, laughter, silliness, quick wit, and anything to brighten your day. I am sure that if he had his way, not a tear would be shed on his behalf, but that is beyond his control and the love which we all have for him weighs heavily upon our souls as we grieve his absence.

We invite all those that visit this site to please feel free to leave a message. All of these messages will be preserved and shared in totality with his family. You can leave a message of condolence, you can leave a favorite photo with or regarding Justice, you can leave a funny memory, or anything that is on your heart. There is nothing that can be too heartfelt, and nothing that can be too silly (Justice was talented at appreciating both). Just leave what feels right to you and know that it will be appreciated by each member of his family.

Justice suffered for many years from depression and mental illness but continued to fight each and every day like the warrior poet that he is until the suffering, torment, and anguish of depression overcame his capacities and he took his own life.

Justice is loved profoundly and survived by his father Patrick Snyder, his mother Martha Eagar, and his siblings: Hope, Honor, and Merit Snyder.

Although we could never capture who he is in a sentence, paragraph, or novel, there were certain things about Justice that were clear, undeniable, and quintessentially Justice. He was literal, logical, and funny as hell! He was as complex as he was simple, as deeply thoughtful as he was transparent. He varied in all of his interests and passions in life including: writing, music, gaming, politics, poetry, theology, humor, and within those interests he varied as well.

He would delve with gusto into video games filled with blood, guts, and monsters; yet, he would equally dedicate himself to games about flowers, simple twine, or love. He wrote stories, screenplays, and poetry that would move your soul to fear, or encourage you to be brave enough to love again. He listened to almost every genre of music with equal fervor, from classic metal bands, to instrumental orchestra arrangements, from urban sounds to classic folk music. He could sing along with Metallica, Nova Rockafeller, and then grab the ukulele and pick out a Grace Vanderwaal song.

He could speak intelligently about most topics and could debate with you until your face was blue, or he could effortlessly make you laugh so hard that you could not breathe and then join you in your laughter. He was exceptionally sensitive to the emotions of others, and instinctively knew when someone needed just to be heard, or he could walk you through your own problems one question at a time until you stumbled upon your answer, or he could sit quietly with you as silence filled the room and he was there with you in the angst of your pain, and he had a sixth sense to know when you needed to laugh even when you did not realize it and he would find a way to make your soul break free from your cares and burst into laughter with him. Oh, how he loved to make others laugh. Oh, how his laughter seemed to heal the souls of all those who loved him. He was as compassionate as he was hilarious, and as comforting as he was encouraging.

He read extensively about philosophy, theology and could quote Nietzsche, and in the same breath quote “Tommy Boy” or another show that had made him laugh. He read horror, romance, psychology, sci-fi, fantasy, comics, ancient scripture, and would devour a new series. His imagination seemed endless and vivid, and he could draw you into a story to the point it almost felt tangible. He could make any situation into a pragmatic logic driven issue with a solution. He was a hard worker and was the first to volunteer to provide service whenever needed. He spontaneously supplied voices for our family pets and at times inanimate objects, just to make us laugh.

He was simple, yet exceedingly complicated, he was eloquent and ridiculously silly. He was deeply human, and immeasurably loved beyond his own comprehension.

To order memorial trees or send flowers to the family in memory of Justice Spencer Snyder, please visit our flower store.