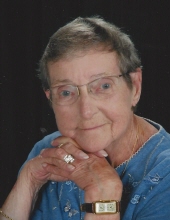 Mary H. (White) Wagner, 91, passed away on January 25, 2017. She was born on September 6, 1925 in Indianapolis to David and Estella (Miller) White. Mary married the love of her life, Ralph J. Wagner, on June 22, 1946. Ralph predeceased her in December 1978. Mary graduated from Manual High School in 1942. She worked in inventory for Sani-Serv/Burger Chef from 1967 until 1977 and then as an inventory specialist for Combs Gates from 1980 until 1990, when she retired. Mary was a member of Sacred Heart Catholic Church and at one time was also a member of Our Lady of the Greenwood Catholic Church. Her memberships included Sacred Heart Ladies Guild, the American Business Women’s Association, and FNS Club. She is survived by her son, John (Jeanne) Wagner of Indianapolis; her daughter, Mary Kay (Carlos) Hood of Danville; as well as 4 grandchildren, 7 great-grandchildren and 2 great-great-grandchildren. Visitation will be Sunday, January 29, 2017 from 2 p.m. until 6 p.m. at Daniel F. O’Riley Funeral Home, 6107 S. East Street (US Hwy 31 South), Indianapolis, IN 46227. A Mass of Christian Burial will be celebrated at 10 a.m. on Monday at Sacred Heart Catholic Church 1530 Union Street, Indianapolis, IN 46225. Burial will be in St. Joseph Cemetery. Memorial contributions may be made to Sacred Heart Catholic Church. Online condolences may be shared with the family at orileyfuneralhome.com.

To order memorial trees or send flowers to the family in memory of Mary Helen Wagner, please visit our flower store.