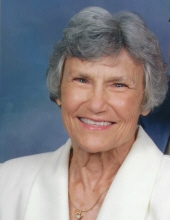 Mary Peper Jockish, 87, Greenwood, entered into Eternal Life on September 28, 2020. Mary was born December 20, 1932, in Lebanon, Indiana. She was the daughter to Owen and Ruby Peper and sister to William, Oliver, Wayne Peper, and Vye Peper Speitel, who all preceded her in death. Two sisters-in-law, Jereoline Peper and Marjorie Kreuzman, survive, along with a host of nieces and nephews. Mary graduated from Lebanon High School. She continued her education, graduating from the Indiana Business School in 1951. She worked for General Motors for five years in public relations.

She met the love of her life, the dashing Harold Jockish, through friends. They married on August 6, 1955. They were married almost 63 years at the time of Harold’s passing in 2018. They exemplified commitment, teamwork, patience, and giving to the community. They settled in the Indianapolis Garfield Park Area and expanded their flower business, Jockish Flowers, which was started by Harold’s parents in 1945. Mary kept the accounting and helped with delivering while raising their six children, Christopher Jockish, Julie (Paul) Catania, Jill (Dan) Deak, Jane (Gary) Young, Jennifer (Jack) Carr, and Joanna Jockish. She also loved her grandchildren, Mary Catania (Zach) Vance, Samantha (Jeff) Wilham, Logan and Zach Deak, Tom and Megan Young, David and Gracie Carr, and Paul (Kymberly) Catania, Jr.; great grandchildren, Joey and Nick Catania, Devin Wilham, Maverick and Kamryn. Mary enjoyed watching all of her children’s and grandchildren’s sporting events. She always gave a helping hand in her fun, loving, patient, and kind way.

She also loved local sports. A quiet woman, she would surprise her grandchildren hooting and hollering for her favorites. She also had a passion for travel, and her love of games was equally apparent during countless matches of Rummikub, and Chinese Checkers, in which she expertly won with a smile and tiny giggle.

Mary and her children loved animals, especially horses, so the family moved to the “country” in Greenwood. She was a member of the Women’s Floral Society, volunteered at Meals on Wheels, and was secretary of the riding club, Valley Riders. Mary had a faithful, honest, generous, and humble soul. She embodied Christ.

A special thank you to The Hearth at Stones Crossing's dedicated employees, past and present, for the care given to Harold and Mary, especially Kristy and Channel.

The Mass of Christian Burial will begin at 1 p.m., Tuesday, October 6, 2020, at SS. Francis and Clare of Assisi Catholic Church, 5901 W. Olive Branch Road, Greenwood. Friends and family will gather there from 12 Noon until Mass on Tuesday. Entombment will follow at Calvary Cemetery. Memorial contributions may be made to the church or to the Catholic Youth Organization. Visit www.ORileyFuneralHome.com to share a favorite memory or to sign the online guest registry.

To order memorial trees or send flowers to the family in memory of Mary Peper Jockish, please visit our flower store.