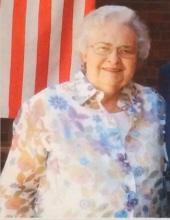 Maryfrances “Mike” Wendling Jennings was born September 18, 1925, in Indianapolis to the late Louis and Beatrice (Schludecker) Wendling. Mike was residing at St. Paul Hermitage in Beech Grove when she passed peacefully to be with the Lord on March 9th, 2020, at the golden age of 94.

Mike was a devout Catholic and a member of St. Mark Catholic Church her entire adult life. She donated her time and talents to the church in whatever capacity was needed. She and her husband, George, were awarded the Spirit of Service Award from the Archdiocese of Indianapolis. Mike graduated from Marian University with a Home Economics Degree, which she used daily while raising twelve children. Mike was a member of St. Mark’s Bowling League and managed several Speedway Gas Stations.

Mike spent her life in the service of others. She was married to George E. Jennings for nearly 70 years. She was preceded in death by George and a brother, LJ Wendling. She leaves behind a brother, Don Wendling and twelve children, Bill (Marie Hilda), Anne (Phil) Breedlove, Sue Hillman, Tom (Mary Lynn), Joan (John) Sanew, Joyce (Bob) Myles, Holly Jennings, Ginny (Chuck) Taylor, Terri (Rick) Utterback, George (Tammy), Paul (Jane), and John (Amy). Mike was blessed additionally with 31 grandchildren and 36 great grandchildren. She was an avid card player, Chinese checkers player, Dominoes and loved to spend time with her children, grandchildren, and great grandchildren. She loved life and was a very strong individual. She spent many years camping with any number of kids during the week while George minded the store.

In celebration of a life filled with love, please join the family of Mike Jennings for visitation on Sunday, March 15, 2020, 2 to 5 p.m., at the O’Riley Funeral Home, 6107 S. East St., Indianapolis. Recitation of the rosary will be at 4:30 p.m. Prayers will be said at 9:30 a.m., Monday, March 16, 2020, at the funeral home, with the Mass of Christian Burial at 10 a.m., in St. Mark Catholic Church. Entombment will be at Calvary Cemetery. Memorial contributions may be made to St. Paul Hermitage. Visit www.ORileyFuneralHome.com to share a favorite memory or to sign the online guest registry.

To order memorial trees or send flowers to the family in memory of Maryfrances "Mike" Jennings, please visit our flower store.