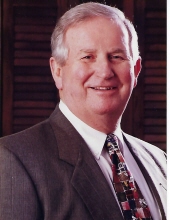 Patrick Joseph Bennett IV died peacefully at home Monday, August 7, 2017. He was born to the late Patrick & Margaret Bennett in Universal, IN on April 4, 1933.

Pat spent 40 years as an attorney, much of it at his firm Bennett & Sheff in Indianapolis. He passed the bar after finishing IU law school with four children at home and working full time for the Indiana State Police, where he served as a trooper for 15 years. He lived much of his life near the water and spent a lot of time in or under it, as he was one of the first divers for the police force. Later he served on the board of the Indiana State Police. His career began in the U.S. Navy and he spent time on the USS Andromeda in Southeast Asia.

Tennis was not just sport for Pat but an obsession (followed closely by his love of ice cream). Lessons led to tournaments at Riviera Club. He moved his family to Greenwood where the first renovation at the house was to install a tennis court. Many summer parties were enjoyed there and Pat & Marie were somehow in all of the sporting events, tennis, volleyball, soccer, swimming, softball, and grilling!

An avid coach, Pat and his wife Marie started the Center Grove Lassie League along with Bruce Banta in 1973 and soon after developed the traveling team that his daughters all played on. Now, 40 years later, his great granddaughter plays with this league.

Memorial services, an Irish Wake, will be at the home of his daughter on September 16th from 4pm to 8pm. Contact a family member for address. The Daniel F. O'Riley Funeral Home is handling arrangements. Visit www.ORileyFuneralHome.com to share a memory or to sign the online guest registry.

To order memorial trees or send flowers to the family in memory of Patrick Joseph Bennett, IV , please visit our flower store.