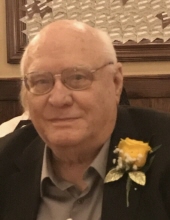 Paul G. Fox, 84, Indianapolis, passed away May 30th, 2022. He was a lifelong Indianapolis resident, born to the late Charles and Walburga Fox on June 30, 1937. He was the youngest and last survivor of eight children: Anne, Charles, Martha, Rita, Therese, Vince, and Virginia.

Paul faithfully served the Catholic Church, spending 16 years at The Criterion, serving as a writer and photographer. Paul then became Public Information Director for Marian College, always proudly representing the school in the most positive light. There he was more than just the PID, he was an ambassador for the college. He took pride in educating students and visitors on the significance of the college with the original owners of the Indy 500, which all had mansions on the campus. He especially loved giving tours of the Allison Mansion, with specific details of how it was built. Paul also made it a point to get to know the names of each student and especially the English as a Second language (ELS) students that came to Marian from different countries in the Middle East, S. America and Asia.

Paul continued to serve his faith by working with Catholic Cemeteries and helped raise money for various Catholic communities through weekly Bingo games at Roncalli High School and at Good Shepherd Parish.

The Mass of Christian Burial will be Monday, June 6, 2022 at 2 pm at St. Ann Catholic Church, 6350 S. Mooresville Road, Indianapolis, with vitiation an hour before Mass. Burial will be at Calvary Cemetery. Services are entrusted to O'Riley - Branson Funeral Service & Crematory. Remembrances and tributes may be made at www.OrileyBranson.com

To order memorial trees or send flowers to the family in memory of Paul G. Fox, please visit our flower store.