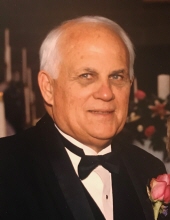 He graduated from St. Philip Neri in 1949. He was a 1953 graduate of Cathedral High School, where he excelled in football, basketball, and baseball. He went on to St. Edward’s University in Austin, Texas and played basketball and baseball. He served in the United States Army from 1956-58.

Bob was an insurance salesman for Metropolitan Life Insurance, before retiring in 1990.

Bob and Susie joined St. Jude Catholic Church in 1960. He was very active at St. Jude, serving as the Athletic Director and as a lay minister. As a CYO basketball coach, his teams won four Archdiocesan CYO championships. He was a recipient of the Monsignor Busald and St. John Bosco awards from the CYO. He was also a member of the Knights of Columbus Council 3660.

Bob was preceded in death by his wife, Susann, his parents, brothers-in-law, Fritz Leucht and Tom Eckstein, and a grandson, Nicholas.

Visitation will be on Thursday, February 28, 2019, 4 to 8 p.m., in St. Jude Catholic Church and from 9:30 – 11 a.m., Friday, March 1, 2019, at the church. Mass of Christian Burial will be celebrated at 11 a.m., Friday, at St. Jude. Burial will follow in Calvary Cemetery. In lieu of flowers, memorial contributions are preferred to Catholic Youth Organization, Roncalli High School or to St. Jude Catholic Church. Envelopes will be provided. Funeral arrangements are being handled by the Daniel F. O’Riley Funeral Home. Visit www.ORileyFuneralHome.com to share a favorite memory or to sign the online guest registry.

To order memorial trees or send flowers to the family in memory of Robert E. Kirkhoff, please visit our flower store.