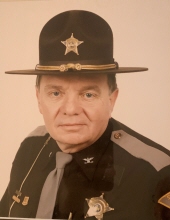 He graduated from Howe High School in 1957, where he was Senior Class President and an outstanding basketball player and athlete. He received an Associate Degree from Indiana Central University and earned his Bachelor’s and Master’s Degrees from Butler University. He was a member of Butler’s basketball team before an injury ended his career.

Ron worked for 9 years at IPS while working part time for the Marion County Sheriff’s Department. He was appointed as a Merit Deputy on June 30, 1960, and during his law enforcement career, he held the ranks of Deputy through Colonel, serving in various capacities. He also received numerous letters of commendation before retiring in 2008.

He will be greatly missed by those who were honored to know him.

Visitation for Ron will be held privately Saturday morning, March 28, 2020, at the O'Riley Funeral Home. The funeral service will also be on Saturday at the funeral home, with burial following at Round Hill Cemetery. Those wishing to participate in Ron's funeral by watching the service are welcome to do so on the O'Riley Funeral Home YouTube channel: https://m.youtube.com/channel/UCrxmCV_sXzQnNTp490g5yCQ. A public celebration of Ron’s life will be held at a later date. www.ORileyFuneralHome.com

To order memorial trees or send flowers to the family in memory of Ronald L. Chappell, please visit our flower store.