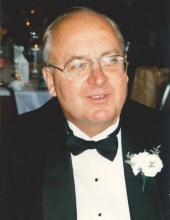 Thomas W. “Tom” Huebner, 81, of Indianapolis, passed away at his home in the afternoon hours of January 15, 2020. Tom was born on July 18, 1938 to the late Harry and Matilda (Gamstetter) Huebner in Beech Grove, Indiana. At the age of 16, he met his sweetheart, Patricia S. (Mahoney) Huebner. Tom and Patricia were united in marriage on April 23, 1960 in St. Roch Catholic Church in Indianapolis.

Tom graduated from Sacred Heart Catholic High School in 1956. Following his graduation, he attended Marian College where he sang in a choral group. Tom is most known in the Indianapolis community for his ownership of Huebner Auto Service. Tom was a well-respected business owner on the south side of the city where many of his customers were truly his friends. He was a trusted auto repairman who all in the community could count on. His family remembers him as a hard worker who was devoted to providing for his family.

A devout Catholic, Tom was a member of St. Roch Catholic Church. Tom was a Third Degree in the Knights of Columbus #3660 - Monsignor James M. Downey Council. Tom enjoyed doing many activities outdoors such as; fishing, yardwork, feeding and watching the birds, and being a friend to the squirrels. Known to tinker, Tom was always fixing, modifying, or building something. Tom collected model trains and enjoyed building the scenery that surrounded them. A baseball fan, Tom loved to watch the St. Louis Cardinals and Cincinnati Reds play. When Tom’s father, Harry, was living, he took him on many trips, a favorite being to Hawaii; if you spent time around Tom you were bound to hear a story about his dad. Tom was a very gentle and patient man, his loving spirit shined through in his singing to his grandchildren and great grandchildren, which he enjoyed doing so much. Above all, Tom loved his wife, children, grandchildren, and great grandchildren. Tom is going to be missed greatly by his loving family and friends.

Along with both of his parents, Tom is preceded in death by two sons-in-law, Michael Kinnett and Bradley “J” Fykes.

Visitation will be Tuesday, January 21, 2020 from 4:00-8:00 P.M. in the O’Riley Funeral Home, 6107 South East Street, Indianapolis. Morning prayers will be said prior to mass at the funeral home on Wednesday, January 22, 2020 at 9:30 A.M. The Mass of Christian Burial will begin at 10:00 A.M. at St. Roch Catholic Church, 3600 South Pennsylvania Street, Indianapolis. Inurnment will follow in Calvary Cemetery. Please visit www.ORileyFuneralHome.com to leave an online condolence for the Huebner family.

To order memorial trees or send flowers to the family in memory of Thomas W. "Tom" Huebner, please visit our flower store.