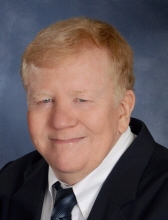 Tipton Joseph Sweany passed away on Tuesday, January 31, 2017. Tip was born on September 29, 1944 in Indianapolis, Indiana. He is predeceased by his father, Homer; and mother, Mary Ellen (Bryant) Sweany. Tip is survived by his dear wife of 36 years, Laura (Barnes); sons, Pat and Mike; and his sister, Sally Meth and her husband Robert; and nephews, John and Mark.
The generosity with which Tip shared his prodigious musical talents has been the focus of countless hours of singing uniting scores of friends, neighbors and family members over the span of over five decades, supporting the liturgical experiences of thousands of people at Holy Name, St. Patrick, Nativity and St. Mark Catholic churches as well as playing his keyboard with the Summer Singers.
He taught at Indianapolis Public Schools for 20 years followed by a career in real estate. In addition to his military service in the Marine Corps Reserves, he was involved in many stewardship organizations including the Sertoma Club of North Downtown Indianapolis and the St. Mark Men’s Club.
A special thank you to Community Health Network for the care and support provided to Tip and his family.
Calling hours will be held on Friday, February 3, 2017 from 4 p.m. until 8 p.m. at the Daniel F. O'Riley Funeral Home located at 6107 S. East Street (US Hwy 31 South) in Indianapolis (Rosary at 7:00 p.m.). Additional visitation will be held on Saturday from 10 a.m. until 11 a.m.. at St. Mark Catholic Church prior to the Mass of Christian Burial at 11 a.m. Online condolences may be shared with the family at orileyfuneralhome.com.

Eternal rest grant unto him, O Lord and may perpetual light shine upon him.
May his soul and the souls of all the dearly departed rest in peace. Amen.

To order memorial trees or send flowers to the family in memory of Tipton Joseph Sweany, please visit our flower store.