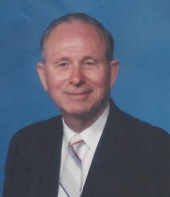 W. Thomas Miller, 90, Indianapolis, passed away on February 5, 2017. He was born June 12, 1926 in Detroit Michigan, to William Tennant and Winifred Cecelia Doerr Miller. Tom served in the Navy during World War II as an aviation radioman. It was during that time that he met Florence A. McGauley and they were married in 1946 in the Blessed Sacrament Chapel of SS. Peter & Paul Cathedral. Tom was a graduate of Indiana University and a CPA. He served as Treasurer of the Buehler Corporation and General Manager of Buehler’s Turbocraft division; Vice President Finance of L.A. Darling Company; and Chairman, President and CEO of Cam-Or, Inc. After retiring he continued to be involved in corporate work as a business consultant and as an active member of SCORE, serving as Vice Chairman and Chairman of the Indianapolis Chapter and Indiana District Representative. He and Flo traveled extensively, visiting six continents. He is survived by his wife of 70 years, Florence; and their children, Thomas E. (Pamela) Miller of San Carlos, CA, Patrick J. (Sheila) Miller of Muskegon, MI, Rosemary A. (Denis) Piotrowski of Challis, ID, Katherine M. (William) McNeely of Brownsburg, IN, Robert P. (Elaine) Miller of Nineveh, IN, Alice J. Miller of Indianapolis, IN, and William H. (Sandy) Miller of Latham, NY; 15 grandchildren; and 3 great grandchildren. He is also survived by his brothers, David Miller of Naples, FL and James Miller of Bay City, MI. He was preceded in death by his siblings, Rita Lee, Winifred Natschke, and Raymond Miller. Visitation will be Wednesday, February 8, 2017 from 5 p.m. until 7 p.m. at Daniel F. O’Riley Funeral Home, 6107 S. East Street (US Hwy 31 South), Indianapolis, Indiana. A Mass of Christian Burial will be celebrated on Thursday, February 9, 2017 at 10 a.m. in St. Mark Catholic Church, 535 E. Edgewood Avenue, Indianapolis, IN 46227. Burial will follow in Calvary Cemetery. Online condolences may be shared with the family at orileyfuneralhome.com.

To order memorial trees or send flowers to the family in memory of W. Thomas Miller, please visit our flower store.