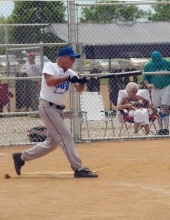 Bill graduated from Whiteland High School where he excelled in baseball and proudly served in the United States Army. His love for baseball and softball led to a lifetime of great experiences and many friendships, playing on various travel teams and even in the World Series of Softball. He was inducted into the Softball Hall of Fame in the 1990s. He retired from Eli Lilly & Company as a supervisor in 1997 after many years of employment. Through the years, he was a part of St. Patrick, St. Thomas More, and Sacred Heart parishes. He also enjoyed fishing, mushroom hunting, and was a great prankster. Above all, Bill was strongly devoted to his family. He was a caretaker, often looking after family members who needed his help. His memory will be forever cherished by a loving family and many friends.

In addition to his parents, he was preceded in death by his siblings, Don Hohlt, Robert Hohlt, and Betty Wilson.

Visitation will not be observed. A committal service and rosary will be held on Friday, October 30, 2020, 11 a.m., in the Calvary Cemetery Chapel. Memorial contributions may be made to the Disabled American Veterans. O’Riley Funeral Home is entrusted with funeral arrangements. Visit www.ORileyFuneralHome.com to share a favorite memory or to sign the online guest registry.

To order memorial trees or send flowers to the family in memory of William G. Hohlt, please visit our flower store.