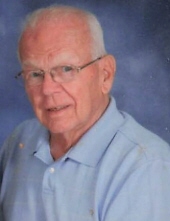 Albert J. “Shavey” Herbertz, 87, of Indianapolis, passed away at Otterbein Senior Living in Franklin on December 31, 2021. Shavey was born in Indianapolis on February 15, 1934, to the late Urban and Helen (Kirsch) Herbertz. He graduated from Sacred Heart High School in the class of 1952 with his late wife, JoAnn (Miller) Herbertz, who preceded him in death on January 30, 2020. Shortly after high school, the two were wed on September 12, 1953, in Holy Name Catholic Church.

JoAnn and Shavey were long-time parishioners of Holy Name Catholic Church where they raised their children in the parish. Shavey was active there as a lector, in the Men’s Club, and through the CYO as a coach. Shavey loved to coach little league baseball, football, and softball with the youth organization. His passion was evident to others as well, as he was a recipient of the Msgr. Albert Busald Award in 1975 and then the St. John Bosco Medal in 1978. Later in life, JoAnn and Shavey became active members of St. Barnabas Catholic Church where Shavey continued to serve as a lector.

A hardworker to provide for his family, Shavey worked at Indiana Bell as a systems analyst for a number of years, retiring on February 28, 1991. Shavey enjoyed being with his wife and family, playing a good card game, camping, especially in Indiana State Parks, and attending various sporting and school events for their cherished grandchildren. Shavey will be remembered as a loving father and grandfather who was devoted to his family.

Along with his wife of 66 years, JoAnn, Shavey was preceded in death by his brothers, Donald, Joseph, and Jerome Herbertz, and an infant sister, Elizabeth Herbertz.

Visitation will be held privately for the Herbertz family. The Mass of Christian Burial will be celebrated by on Thursday, January 6, 2022, at 11:00 AM in St. Barnabas Catholic Church. This will be a funeral Mass for family members and relatives only; others friends may watch the live stream of the funeral Mass here: https://vimeo.com/event/1697580

In lieu of flowers, memorial contributions may be made to the CYO; 580 E. Stevens Street, Indianapolis, IN 46203-1781. Please visit www.ORileyFuneralHome.com to leave an online condolence for the Herbertz family.

To order memorial trees or send flowers to the family in memory of Albert J. "Shavey" Herbertz, please visit our flower store.