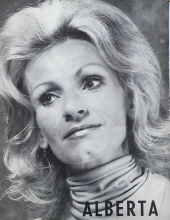 Alberta Rose Klein, née Amthor, 88, died Sunday, Nov. 7, at Forest Creek Village in Indianapolis. Born Feb. 3, 1933, she was the only child of Albert Paul, an immigrant from Bavaria, and Rosemary (Moutoux) Amthor.

Out of school, she worked in the art department of Citizen’s Gas and Coke Utility. She married Ralph E. Eacret, a sailor she met at her grandfather Joseph Moutoux’s medical practice.

A full-time wife and mother, she found expression for her talents by volunteering for such local cultural gems as the Indianapolis Symphony Orchestra.

Her interest in drama bore fruit in the desert of Arizona. In Phoenix in the early 1970s she worked on the stage, on the production lot and on location. She was a proud union member of Screen Actors Guild and AFTRA.

Returning to her hometown she worked in education/career counseling and as an instructor at John Robert Powers International. In 1986 she established her own talent agency and acting school, Alberta Rose International.

She is survived by her daughter Diane Eacret of Peaks Island, Me. and son Steve (Sandee) Eacret of Gilbert, Az. as well as grandchildren Joshua, Albert, Chelsie and Zachary. Her children Susan Ann “Suzi” Eacret and Ralph Eugene “Skipp” Eacret Jr. predeceased her. Her lifelong friend Margo Underwood carries the memories of their adventures together.

To order memorial trees or send flowers to the family in memory of Alberta Rose Klein, please visit our flower store.