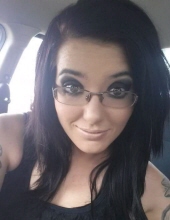 Paige McGuire, 24, of Indianapolis, passed away December 3, 2017 at Franciscan St. Francis Health in Indianapolis. Born January 17, 1993 in Indianapolis, Paige was the daughter of Jason M. and Krysti L. (Flint) McGuire; her parents survive.

She was a 2011 graduate of Southport High School where she enjoyed playing softball. Paige was a free spirit who loved music, her own way of dancing, and drawing. A loving daughter, mother, sister, granddaughter, and friend, Paige’s memory will be forever cherished by her family and countless friends.

Paige is preceded in death by her paternal grandfather, Mike Caito.

Family and friends will gather to celebrate the life of Paige McGuire from 4:00 p.m. until 8:00 p.m. on Thursday, December 7, 2017 at the Daniel F. O’Riley Funeral Home, 6107 S. East Street, Indianapolis. The funeral service will begin at 8:00 p.m. on Thursday at the funeral home. In lieu of flowers, please consider making a donation to the Partnership for Drug Free Kids; envelopes will be available at the funeral home. Visit www.OrileyFuneralHome.com where you may express online condolences to Paige’s family.

To order memorial trees or send flowers to the family in memory of Amanda "Paige" McGuire, please visit our flower store.