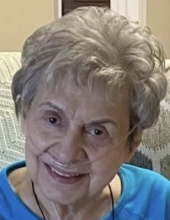 Angela T. Forni, 88, of Fishers and previously, Indianapolis, peacefully passed away while surrounded by her family on December 9, 2022. Angela was born on April 5, 1934, in Indianapolis to the late Joseph and Margaret (Genco) Morone. She was a graduate of Sacred Heart High School in the class of 1952. On September 11, 1954, Angela wed the late Ralph L. Forni; Ralph preceded Angela in death in 1999.

Raising her five children and being a devoted wife was a lifelong career for Angela. She was devoted to her Catholic faith and was a longtime parishioner of St. Jude Catholic Church. When she was in better health, Angela delivered for Meals on Wheels and volunteered at IU Health Hospital.

A great card player, Angela was a member of many Bridge clubs and loved to play a good game of Euchre. Angela was incredibly active and loved walking on her treadmill. A talented baker, Angela made the best Italian cookies and fruitcakes. She enjoyed traveling to numerous locations, but her favorite destinations include New York City, Ireland, and Italy. With a sharp wit and a great sense of humor, Angela could make anyone laugh. Ultimately Angela was at her happiest when surrounded by her children; she was the most caring and loving mother. She will be incredibly missed.

Along with her parents and husband, Angela was preceded in death by her brothers, Joseph and Nino Morone, and her sister, Mary Frances Meyers.

To order memorial trees or send flowers to the family in memory of Angela T. Forni, please visit our flower store.