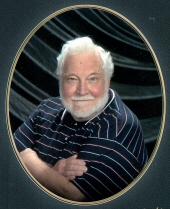 August "Gus"Joseph Stinnett, 83, Indianapolis, passed away Wednesday, October 5, 2016. He was born in Indianapolis on March 8, 1933 to Paul J. and Josephine Sansone Stinnett. Gus was a graduate of Marian (College) University and served in the US Army during the Korean War. Gus worked as a comptroller for the Boy Scouts of America for 25 years. He previously worked for Indiana National Bank, Plumbers Supply Co., the Indiana State Fair as a comptroller, and as the business manager at St. Lawrence Parish. He also worked at Stumpf Sisters Meats in the City Market. He served as scoutmaster for Troop 93 from St. Catherine of Siena Parish for many years. Gus has been a dedicated member and steward of Holy Rosary Catholic Church his entire life. Gus is survived by his wife, Ruth Feltz Stinnett; children, Michael, Catherine Pfeifer (David), Steven (Valerie), John (deceased) (Sharon); Rita Sahm (Raymond), Suzanne Stinnett (Tom Corbett, Ralph Boots); grandchildren, Brian, Brandon (deceased), and Brittney Pfeifer, Gilbert and Michael Ham, Allyson Cassaday, Jordyn Stinnett, and Darren Wilkinson, Nicholas Sahm (Erin), Benjamin Corbett (Annie); and 9 great grandchildren. A Mass of Christian Burial will be celebrated on Monday, October 10, 2016 at 10:30 a.m. in Our Lady of the Most Holy Rosary Catholic Church. Visitation will be Sunday from 2 p.m. until 6 p.m. in Daniel F. O'Riley Funeral Home where prayers will be said on Monday at 9:45 a.m. prior to Mass. Burial will be in St. Joseph Cemetery. Online condolences may be shared with the family at orileyfuneralhome.com. The family asks, in lieu of flowers, donations in his memory may be made to support the "Rev. Augustine J. Sansone Endowment for the training of Seminarians at Simon Brute' College Seminary" in the Archdiocese of Indianapolis. Contributions should be made out to: Catholic Community Foundation f/b/o Rev. Augustine J. Sansone Endowment, Attn: Melanie Johnson, 1400 N. Meridian St., Indianapolis, IN 46202.

To order memorial trees or send flowers to the family in memory of August Joseph Stinnett, please visit our flower store.