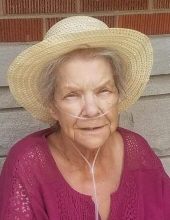 Beverly J. Collins, 77, of Beech Grove, passed away peacefully at her home on Tuesday, August 21, 2018 surrounded by her loving family. Born June 17, 1941 in Indianapolis, Bev was the daughter of the late Lawrence and Edith (Thompson) Tabor. On February 16, 1991 Bev was united in marriage to Ronzell B. Collins and he survives.

Bev was a homemaker for most of her life and was a former member of the Beech Grove Ladies Auxiliary. A loving wife, most awesome mother and best friend, grandmother, great grandmother, and friend, Bev’s memory will be cherished by her family and many friends.

Along with her parents, she is also preceded in death by three brothers, Bobby, Lawrence Jr., and Johnny Tabor; and her sister, JoAnn Boycott.

Family and friends will gather to celebrate the life of Bev Collins from 2:00 p.m. until 6:00 p.m. on Thursday, August 23, 2018 in the Daniel F. O’Riley Funeral Home, 6107 S. East Street, Indianapolis. The funeral service will begin at 6:00 p.m. on Thursday at the funeral home. In lieu of flowers, please consider making a donation to the American Cancer Society. You are invited to visit www.OrileyFuneralHome.com where you may express online condolences to Bev’s family.

To order memorial trees or send flowers to the family in memory of Beverly J. Collins, please visit our flower store.