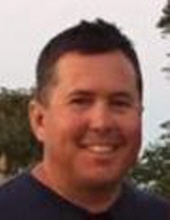 Brian Perry Thomas, 44, of Indianapolis, passed away unexpectedly on February 7, 2019. Brian was born in Flint, Michigan on February 10, 1974 to Donald Richard Gibson and Mary Linda (Perry) Thomas. On May 15, 1999 Brian was united in marriage to Amy P. (Heath) Thomas.

Brian was a devoted father and husband. His two sons were his pride and joy and he adored his wife. Brian was a family man, who was not only devoted to his sons and wife, but also to his nieces, nephews, sisters and parents. Brian was currently the Southport High School Lacrosse coach and was a founder of the Perry Township Junior Lacrosse League. Brian loved the outdoors and was an accomplished fisherman, hunter, and hiker. Brian was currently employed as a project manager for Carter Lumber. Previously, Brian was the owner of his own successful framing company, Perry Thomas Construction for ten years. Brian was known as an all-around great guy. He was always lending a helping hand to anyone in need.

Brian is preceded in death by his father-in-law, Dave Heath.

Family and friends will gather on Tuesday, February 12, 2019 from 3:00-6:00 P.M. at the Daniel F. O’Riley Funeral Home, 6107 South East St., Indianapolis with a time for sharing memories beginning at 6:00 P.M. In lieu of flowers, the family has requested memorial contributions be made to a scholarship fund they started in Brian's memory. Envelopes will be available at the funeral home Tuesday, or you may visit any Fifth Third Bank location to make your contribution to the Brian Thomas Scholarship Fund. Please visit www.orileyfuneralhome.com to sign the online guest registry or to share a special memory of Brian.

To order memorial trees or send flowers to the family in memory of Brian Perry Thomas, please visit our flower store.