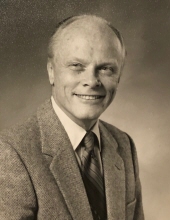 Charles T. “Chuck” Stone, 89, of Indianapolis, passed away on the evening of January 16, 2020 at the Franciscan Hospice House. Chuck was born on March 5, 1930 in Madison, Wisconsin to the late Gerald D. Stone and Reba (Hayden) Stone Hewett. On December 27, 1966 he wed Janet Louise (Powers) Stone in Spokane, Washington; Janet survives.

Chuck graduated from Indiana University with a Bachelor of Sciences degree. In 1952, Chuck was employed at Eli Lilly as a manager of the capsule plant, including five and half years of managing the plant in San Juan, Puerto Rico. In 1986 Chuck retired from Eli Lilly after 34 years of employment.

Always tinkering with things, Chuck was known to be a handyman around the house and to fiddle with gadgets. Chuck truly enjoyed working puzzles, especially crosswords. Chuck had a passion for sailing and enjoyed coaching his son’s soccer teams when they were younger. Always looking for a way to serve others, Chuck volunteered at Oasis, Indianapolis; an organization that promotes healthy aging and activities for seniors. Chuck had a great sense of humor, even through his illnesses he kept his love of jokes going. Chuck’s charming wit and sparkling smile will be missed by all who knew and loved him.

Along with his parents, Chuck was preceded in death by his sister, Charlotte Pieters.

Visitation will be Monday, January 20, 2020 from 4:00-6:00 P.M. at the O’Riley Funeral Home, 6107 South East Street, Indianapolis. In lieu of flowers, the family has requested for donations to be made in Chuck's memory to a charity of your choice; envelopes will be provided at the funeral home on Monday. Final care and cremation arrangements are entrusted to the O’Riley Funeral Home. Please visit www.orileyfuneralhome.com to leave an online condolence for the Stone family.

To order memorial trees or send flowers to the family in memory of Charles T. "Chuck" Stone, please visit our flower store.