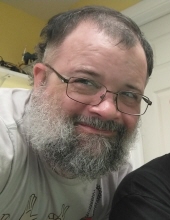 Christopher Edward “Chris” Meadows, 47, of Indianapolis, Indiana, died October 14 after being struck by a hit-and-run driver as he rode his bicycle. Chris was born on March 9, 1973, in Kansas City, Kansas, the son of Mark and Judy Meadows of Cassville, Missouri. He graduated from Cassville High School in 1991 as a National Merit Scholar and attended Missouri State University in Springfield, receiving a B.S. in Mass Media in 1996 and a B.S. in Computer Information Systems in 2001.

Chris was an expert writer and wrote countless freelance articles. He had a large presence on the Internet, writing, editing, interviewing, and maintaining blogs. He was an internationally recognized authority on e-book readers and e-publishing. Chris was loved and respected by a wide following across the country and around the world.

Most of Chris’s employment involved providing support and customer service relating to computers and other technical areas. He had the uncommon ability to explain the most inscrutable and complicated technological applications in simple terms that anyone could understand. Chris was unflappable in helping customers from timid to irate. His coworkers remember his trademark greeting when answering the telephone, “This is Chris. How can I make your day better?” At the time of his death, Chris was employed by Anthem Blue Cross Blue Shield Insurance in Indianapolis.

Chris will be available for visitation Wednesday, October 21st from four to eight in the evening at Daniel F. O’Riley Funeral Home in Indianapolis. Afterward, Chris will return home for interment in a family section of Maple Park Cemetery in Aurora, Missouri. A graveside service will be held on October 24th at one in the afternoon under direction of Peterson Funeral Home with Pastor David Martin of Elm Branch Christian Church officiating. Memorial contributions can be made in Christopher's honor here: https://supporters.eff.org/donate/30for30--S . Please visit www.ORileyFuneralHome.com to leave an online condolence or share a favorite memory with the Meadows family.

To order memorial trees or send flowers to the family in memory of Christopher Edward "Chris" Meadows, please visit our flower store.