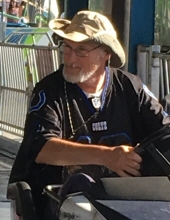 Cletus F. Brinker, 62, lifelong resident of Indianapolis, passed away suddenly at work on September 3, 2020. Cletus was born on August 12, 1958 in Indianapolis to the late Everett and Mary (Carney) Brinker.

Cletus graduated from Emmerich Manual High School in 1976. He was currently working as a correctional officer at the Marion County Jail, where he was employed for nearly 41 years. Cletus enjoyed making others smile, watching the Miami Dolphins play football, attending the Indianapolis 500 nearly every year, watching monster trucks, and above all spending time with his family. He was a hardworking man who you could always depend on with a kind and caring nature. Cletus will be remembered as a dedicated father and grandfather.

Visitation will be held on Tuesday, September 8, 2020 from 4:00 to 8:00 P.M. at the O’Riley Funeral Home, 6107 South East Street, Indianapolis. The funeral service will begin at 11:00 A.M. on Wednesday, September 9, 2020 in the funeral home. Interment will follow in St. Joseph Cemetery, Indianapolis. Please visit www.ORileyFuneralHome.com to leave an online condolence for the Brinker family.

To order memorial trees or send flowers to the family in memory of Cletus F. Brinker, please visit our flower store.