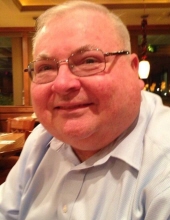 Dan was a 1965 graduate of Southport High School and earned his bachelor’s degree in computer technology from Purdue University. Later in life, he earned a master’s degree in project management from ITT Technical Institute. He worked as a project manager for many years; in 2012 he retired from Information Services Agency of City of Indianapolis-Marion County. After retirement he enjoyed his position as lead driver for Enterprise Rental Car.

Dan was a faithful member of St. Roch Catholic Church, Knights of Columbus Monsignor Downey Council #3660, and the American Legion Post #355. Dan enjoyed having lunch once a month with his fellow classmates from the St. Roch Catholic School class of 1961.

Along with his parents, Dan is also preceded in death by his brother, Timothy A. Pavey and his sister, Kathy A. Lawless.

Family and friends will gather to celebrate the life of Dan Pavey from 4:00 p.m. until 8:00 p.m. on Friday, April 12, 2019 in the Daniel F. O’Riley Funeral Home, 6107 S. East Street, Indianapolis. Additional calling will be from 10:00 a.m. until 11:00 a.m. on Saturday, April 13, 2019 at St. Roch Catholic Church, 3600 S. Pennsylvania Street, Indianapolis. Mass of Christian Burial will begin at 11:00 a.m. on Saturday at the church. In lieu of flowers, please consider making a donation to CYO or American Diabetes Association. Visit www.OrileyFuneralHome.com where you may express online condolences to Dan’s family.

To order memorial trees or send flowers to the family in memory of Daniel E. "Dan" Pavey, please visit our flower store.