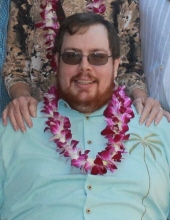 David W. Jones, 33, of Indianapolis, passed away unexpectedly on Tuesday, April 23, 2019 at his home. Born in Indianapolis July 7, 1985, David was the son of Bonnie J. Jones and she survives.

David was a 2004 graduate of Perry Meridian High School. He loved pepperoni pizza, and was a sports fanatic. He enjoyed all Indiana teams, and was a proud season ticket holder for the Indianapolis Colts. A loving son, grandson, nephew, cousin, and friend David’s memory will be forever cherished by his loving family.

David is preceded in death by his maternal grandfather, John H. Jones.

Family and friends will gather to celebrate the life of David W. Jones from 10:00 a.m. until 12 Noon on Friday, April 26, 2019 in the Daniel F. O’Riley Funeral Home, 6107 S. East Street, Indianapolis. The funeral service will begin at 12 Noon on Friday at the funeral home. Burial will follow at Calvary Cemetery. In lieu of flowers, please consider making a memorial contribution to The ALS Association Indiana Chapter; envelopes will be provided at the funeral home. Visit www.OrileyFuneralHome.com where you may express online condolences to David’s family.

To order memorial trees or send flowers to the family in memory of David W. Jones, please visit our flower store.