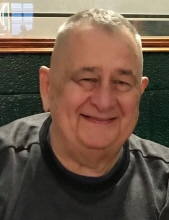 David W. Lytle, 72, of Greenwood, passed away unexpectedly at Community Hospital South in Indianapolis. Born in Indianapolis on February 28, 1947 Dave was the son of the late David M. and Elizabeth Lytle; both of his parents preceded him in death. On October 21, 1966 he was united in marriage to Beverly G. (Cassetty) Lytle and she survives.

Dave was a 1965 graduate of Cathedral High School and proudly served his county in the United States Navy where served as a medical corpsman. Dave graduated from the police academy in Plainfield and continued to serve his community for many years starting at the Johnson Sherriff Department and ending his career at the Greenwood Police Department. He worked in production at Eli Lilly & Company for 35 years retiring in 2002. David was a member of Gracepoint Church in Whiteland.

Family and friends will gather to celebrate the life of Dave Lytle from 1:00 p.m. until 4:00 p.m. on Friday, March 29, 2019 in the Daniel F. O’Riley Funeral Home, 6107 S. East Street, Indianapolis. The funeral service will begin at 4:00 p.m. on Friday at the funeral home. Burial will take place privately and at a later date. In lieu of flowers, please consider making a memorial contribution to Gracepoint Church; envelopes will be provided at the funeral home. Visit www.OrileyFuneralHome.com where you may express online condolences to Dave’s family.

To order memorial trees or send flowers to the family in memory of David W. Lytle, please visit our flower store.