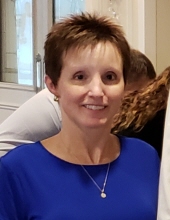 Dawn graduated from Franklin Central High School in 1988 and later from Ivy Tech. She was a proud homemaker and devoted and loving wife and mother. Dawn greatly enjoyed spending time with her family and traveling, often to warm climates. She could often be found cheering on her sons at a little league game or at a marching band competition. Dawn will be fondly remembered for her kind and gentle nature.

Dawn is preceded in death by an infant son, Nicholas Harmon.

In addition to her parents, survivors include her husband of 25 years, David A. Harmon, to whom she was united in marriage June 19, 1993; sons, Andrew, Michael, and Joshua Harmon; brothers, David (Mindy) Ooley and Brian (Leslie) Ooley; niece and nephew, Lauren Arnold and Ryan Ooley; and many extended Harmon relatives.

Friends and family will gather to celebrate the life of Dawn Harmon from 2 to 4 p.m. and from 6 to 8 p.m., Monday, November 12, 2018, in the Daniel F. O’Riley Funeral Home, 6107 S. East Street. The funeral service will begin at 10 a.m., Tuesday, November 13, 2018, in the funeral home. Burial will be in the Acton Cemetery. Visit www.ORileyFuneralHome.com to share a favorite memory or to sign the online guest registry.

To order memorial trees or send flowers to the family in memory of Dawn M. (Ooley) Harmon, please visit our flower store.