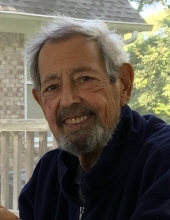 Donald D. Kidwell , 82, of Indianapolis, IN passed away May 11, 2021. He was born in Indianapolis May 1, 1939, to the late Donald and Kathryn Kidwell. Donald was in the first graduating Class of Scecina Memorial High School in Indianapolis, in 1957.

Donald retired after 35 years from General Motors where he was a Tool and Die Maker, becoming superintendent of Master Mechanics for GM Truck and Bus. He was a member of Nativity Catholic Church for over 50 years and was a 4th Degree Member of the Knights of Columbus, Our Lady of Fatima Council. He was an avid golfer and a master gardener - whether it was vegetables or flowers. He was a charter member of Miramar Swim Club where he was a Lifeguard and met the love of his life Jeanne Wierman. They were married August 8, 1959, and she survives.

In addition to Jeanne, survivors include his sons, Kevin (Stephanie) Kidwell and Steven (Angela) Kidwell; daughter, Lisa D. Kidwell; grandchildren, Matthew (Kara) Kidwell, Heather Kidwell, Seth Kidwell, and Ethan Kidwell; great grandchildren, Parker, Brecken, Hunter and Archer Kidwell, sister, Kathleen Jones; and many nieces and nephews. Along with his parents, he was preceded in death by his sister, Patricia McCracken and brothers, Daniel B. Kidwell and Kevin Michael Kidwell.

Visitation will be held Sunday May 16, 2021 3 - 5 p.m., at O’Riley Funeral Home, 6107 S. East St. Indianapolis. A Mass of Christian Burial will begin at 11 a.m., Monday, May 17, 2021, in Nativity Catholic Church. Burial will be at Calvary Cemetery. Memorial contributions may be made to Comboni Missionaries (to support Fr. Michael D. Barton), 1318 Nagel Road, Cincinnati, OH 46255 Visit www.ORileyFuneralHome.com to share a favorite memory or to sign the online guest registry.

To order memorial trees or send flowers to the family in memory of Donald D. Kidwell, please visit our flower store.