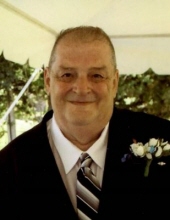 Donald E. Black, 79, of Indianapolis passed away Sunday, September 16, 2018 at Franciscan Hospice House. Born in Indianapolis on November 22, 1938 Don was the son of the late Donald F. and Ruby I. (Newton) Black. He was united in marriage to Judith Y. Kieninger in 2013 and she survives.

Don proudly served his country in the United States Army; he was honorably discharged in 1957. He worked as a railroad conductor for many years. A loving, husband, brother, father, grandfather, and great grandfather, Don’s memory will be forever cherished by his loving family and a host of friends.

His son, Dean Black also preceded him in death.

To order memorial trees or send flowers to the family in memory of Donald E. Black, please visit our flower store.