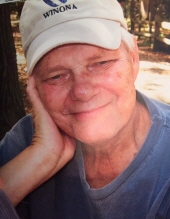 Donald Michael Serensky, 79, of Indianapolis, passed away on June 25, 2016. Don was born on May 1, 1937 in Pittsburgh, PA. He served proudly in the United States Air Force and was honorably discharged in 1959. He was owner-operator of Universal Computer Supplies before retiring in 1998. He had a love of children, nature, hiking, biking, charities and the Pittsburgh Steelers. Don was preceded in death by his parents and sister. He is survived by his wife of 16 years, Brenda Francis Moore Serensky; sons, Victor Serensky (Susan) and Andrew Moore; daughters, Carol Spencer (Brian) and Nancy Serensky (Kat); grandchildren, Michelle Jaquish (Adam), Leah Stacy (Nathan), Kala Serensky, Austin Moore, Brady Spencer and Briana Spencer. A Mass of Christian Burial will be celebrated on Thursday, June 30, 2016 at 11 a.m. at St. Mark Catholic Church, 535 E. Edgewood Avenue, Indianapolis, IN 46227. Visitation will be on Wednesday, June 29, 2016 from 4 p.m. until 8 p.m. at Daniel F. O'Riley Funeral Home, 6107 S. East (US Hwy 31 South), Indianapolis, IN 46227. Burial will be in Orchard Hill Cemetery. In lieu of flowers, donations may be made to Riley Hospital for Children. Online condolences may be shared with the family at orileyfuneralhome.com.

To order memorial trees or send flowers to the family in memory of Donald Michael Serensky, please visit our flower store.