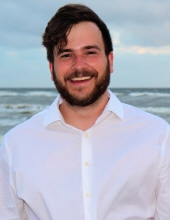 Douglas Gerald Johnston, 22, of Indianapolis, passed away unexpectedly on Tuesday, July 16, 2019. Born August 14, 1996 in Indianapolis, Doug was the son of Brian T. and Dianne (Imran) Johnston; both of his parents survive and reside in Indianapolis.

Doug was a faithful member of St. Barnabas Catholic Church where he attended grade school. He spent his high school years at Roncalli performing in show choir, musicals, school plays, Comedy Sportz; he graduated in 2015. Doug was an aspiring musician and student of musical theatre at Molloy College in Hampstead, New York where he obtained his associate’s degree in fine arts. While living in New York, he enjoyed his work as a “Jack of all trades” at a Cuban restaurant.

Doug is preceded in death by his paternal grandparents, Gerald P. and Helen M. Johnston; his maternal grandfather, Steve Imran; and his uncle, Doug Johnston.

Family and friends will gather to celebrate the life of Doug Johnston from 4:00 p.m. until 8:00 p.m. on Friday, July 19, 2019 in the Daniel F. O’Riley Funeral Home, 6107 S. East Street, Indianapolis. Morning prayers will begin at 9:00 a.m. on Saturday, July 20 at the funeral home followed by 9:30 a.m. Mass of Christian Burial at St. Barnabas Catholic Church, 8300 Rahke Road, Indianapolis. Burial will take place at Calvary Cemetery privately and at a later date. In lieu of flowers, please consider making a memorial contribution to St. Barnabas Catholic Church Music Fund, Roncalli High School Music and Theatre Departments, or the Blaine Jarrett Memorial Scholarship Fund at Buck Creek Players, Inc.; envelopes will be provided at the funeral home. You are invited to visit www.OrileyFuneralHome.com where you may express online condolences to the Johnston family.

To order memorial trees or send flowers to the family in memory of Douglas Gerald Johnston, please visit our flower store.