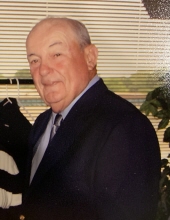 Ed graduated from St. Mary’s High School and attended St. Louis University. He proudly served in the Missouri National Guard and in the United States Air Force during the Korean War. He worked for AC Delco for 35 years, retiring as a sales manager in 1992. He built his own Ham radio shortly after his service to his country and remained an avid radio operator under the handle WD9DVA for many years. After retirement, Ed became active with AFMARS (Air Force Military Auxiliary Radio System) and devoted more than 25 years supporting service men and women connecting them with their families. A devout Catholic, Ed was a member of St. Barnabas Catholic Church and the Knights of Columbus Council 3660. He was also a member of the Greenwood American Legion and loved to golf. Ed will be fondly remembered for his social nature and his strong devotion to his family.

He was preceded in death by an infant daughter, Mary Adele.

Visitation will be Monday, May 3, 2021, 10 – 11:30 a.m., at the O’Riley Funeral Home, with prayers at 11:30 a.m. The Mass of Christian Burial will follow at 12 Noon, in St. Barnabas Catholic Church. Mass will be streamed by visiting: https://vimeo.com/542844330. The committal service will be on Tuesday, May 4, 2021, 11 a.m., (CDT) at Calvary Cemetery, St. Louis. In lieu of flowers donations can be made to Greenwood American Legion Post 252, any veterans-based charity, or a charity of your choice. Visit www.ORileyFuneralHome.com to share a favorite memory or to sign the online guest registry.

To order memorial trees or send flowers to the family in memory of Edward J. Woods, please visit our flower store.