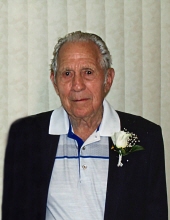 Edward Lewis Wiltsee of Leesburg, Florida passed away on Wednesday, March 6, 2019 at the age of 91 years. He was born in Indianapolis, Indiana. Ed proudly served his country in the US Navy in World War II. After his Naval service, Ed played professional baseball in the Chicago Cubs organization. He worked as a Mason and also owned and operated Wiltsee Building Repair, a sand blasting and building repair business until he retired. He was a member of the Brick Layers Union in Kentucky and Indiana. Ed moved to Fort Myers, Florida from Greenwood, Indiana in 2010. He relocated to Mid Florida Lakes in Leesburg in 2012, where he was a member of the Morning Gossip Table, as well as the Men's Golf Association.

Ed was preceded in death by his wife, Juanita France Wiltsee and two of his children, Martin Wiltsee and Thomas Vandiver.

He is remembered and will be dearly missed by his wife of 2 years, Jackie Austin Wiltsee; daughters, Susan Poynter and Cheryl (Bob) Pearcy, all of Greenwood; sons, Bruce (Veronica) Wiltsee of Brazil, Indiana, Marc (Margie) Vandiver of Greenwood and Deacon Michael (Teresa) Vandiver of Wallace, North Carolina; 18 grandchildren and 32 great grandchildren.

Visitation will be held on Tuesday, March 12th from 6-8 p.m in the Daniel F. O’Riley Funeral Home, 6107 S. East Street, Indianapolis. A graveside service and internment will be held Wednesday, March 13th at 11:00 a.m. at Washington Park East Cemetery, 10612 E. Washington St., Indianapolis, IN. Visit www.OrileyFuneralHome.com where you may express online condolences to Ed’s family.

To order memorial trees or send flowers to the family in memory of Edward Lewis Wiltsee, please visit our flower store.