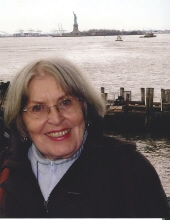 Elfryda “Elfie” Florek, 92, of Bloomington, Indiana passed away peacefully on December 29, 2018. Elfie was born on April 20, 1926 to the late Mr. and Mrs. Kossmann in Schlesien, Germany. In 1954 Elfie married Jan S. Florek. They fled Poland in 1961 to escape communism. When they arrived in the United States they only had a bag of oranges and $2 to their names. The Floreks settled in New Jersey for a short stint before permanently settling in Terre Haute, Indiana. Elfie officially became a United States citizen in 1968.

Elfie was very musically talented. Before arriving in the United States, she obtained a PhD in music this led to her career as a professor of voice at both Indiana State University in Terre Haute, Indiana and at Lincoln Trail College in Robinson, Illinois. Beloved by many of her students, Elfie taught voice lessons privately for a number of years. She was a very accomplished opera singer singing coloratura soprano.

Along with her parents and husband, Elfie is preceded in death by one brother, two sisters, and one great granddaughter.

Family and friends will gather to celebrate Elfie’s life on Sunday, January 13, 2018 in the Daniel F. O’Riley Funeral Home, 6107 South East Street, Indianapolis from 12:00 P.M. until 2:00 P.M. with the memorial service beginning at 2:00 P.M. at the funeral home. Inurnment of Elfie’s cremated remains will take place at Valhalla Cemetery in Bloomington, Indiana at a later date. In lieu of flowers, the family has requested memorial donations be made in Elfie’s honor to the music departments at both Indiana State University and Lincoln Trail College; envelopes will be provided at the funeral home. Please visit www.orileyfuneralhome.com to share a favorite memory or to sign the online guest registry.

To order memorial trees or send flowers to the family in memory of Elfryda "Elfie" Florek, please visit our flower store.