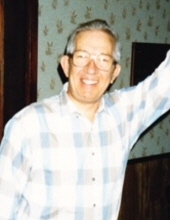 He graduated from Elder High School and attended Xavier University. Gene proudly served in the United States Navy during the Korean War. The family moved to Indianapolis in 1965, and he started a 28-year career with Jones Chemical, where he worked in sales and management. Following retirement, he worked for a number of years for Wessler Engineering.

Gene was a charter member of St. Barnabas Catholic Church, the Knights of Columbus Council 3660, and the Indiana Water Works Association. He was an avid Indianapolis Colts and Cincinnati Reds fan. Gene was an active person who stayed busy as a handyman for friends and family. Above all, he was strongly devoted to his family.

In addition to his parents, he was preceded in death by his wife, Elizabeth “Betty” (Merschbach); brothers, Frank, Elmer, and Robert Liegibel.

Visitation will be held on Wednesday, April 5, 2017, 3 to 8 p.m. in the Daniel F. O’Riley Funeral Home, 6107 S. East St. (US Hwy 31 South), where morning prayers will be said on Thursday, April 6, 2017, at 10:30 a.m. The Mass of Christian Burial will begin at 11 a.m., Thursday, April 6, 2017, in St. Barnabas Catholic Church. Interment will be in Calvary Cemetery. Memorial contributions may be made to St. Barnabas CYO Athletics (envelopes will be available at the funeral home). Visit ORileyFuneralHome.com to share a favorite memory or to sign the online guest registry.

To order memorial trees or send flowers to the family in memory of Eugene J. Liegibel, please visit our flower store.