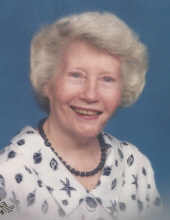 Flo served in the Navy during World War II. It was during that time that she met W. Thomas Miller and they were married in 1946 in the Blessed Sacrament Chapel of SS. Peter & Paul Cathedral.
Flo was a graduate of St. Agnes Academy and Indiana University. She had been involved in parish activities at Nativity, St. Michael, St. Mary, and St. Mark. She was an active member of the WAVES veteran group in Indianapolis. Flo also found time to be a published freelance writer and genealogist, tracing the family’s ancestry back hundreds of years and preserving this history for future generations. After raising their four sons and three daughters, she traveled the world with Tom and visited six continents.

She is survived by her children: Thomas E. (Pamela) Miller of San Carlos, CA; Patrick J. (Sheila) Miller of Muskegon, MI; Rosemary A. (Denis) Piotrowski of Challis, ID; Katherine M. (William) McNeely of Brownsburg, IN; Robert P. Miller of Nineveh, IN; Alice J. Miller of Indianapolis, IN; William H. (Sandy) Miller of Latham, NY; 15 grandchildren and 3 great-grandchildren. She is also survived by her sister, Claire Browning, and sister-in-law, Marilyn McGauley.

She is preceded in death by her husband of 70 years, W. Thomas Miller; her daughter-in-law Elaine Miller; and siblings Jane Enslin, Paul McGauley, and John McGauley.

Visitation will be held on Friday, August 4, 2017, 5 to 7 p.m., in the Daniel F. O’Riley Funeral Home, 6107 S. East Street, where morning prayers will be said on Saturday, August 5, 2017, at 10 a.m. The Mass of Christian Burial will be celebrated at 10:30 a.m., Saturday, in St. Mark Catholic Church. Burial will be in Calvary Cemetery. Visit www.ORileyFuneralHome.com to share a favorite memory or to sign the online guest registry.

To order memorial trees or send flowers to the family in memory of Florence Abigail Miller, please visit our flower store.