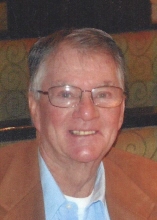 Gerald "Jerry" Wendell Clark, 77, Greenwood, passed away Wednesday, January 4, 2017. He was born in Bloomfield, IN on July 17, 1939 to Murl and Geneva Skinner Clark. Jerry was a Pulitzer Prize winning photographer with the Indianapolis Star and News where he worked for 40 years before retiring as chief photographer. He was preceded in death by his parents and is survived by his wife, Elia Jean Clark; children, Annette Rainbolt (Greg), Cindy Kelley (Tim), Steven Clark, Joanna Sahm (Mike Spellman), Jeffery Clark (Cindy Plymate); siblings, James Clark (Kimberly), Marilyn Gentry (Jack), Jean Everts (Bill), Jerry David Clark (Sherry); 11 grandchildren; and 16 great grandchildren. Visitation will be Sunday, January 8, 2017 from 2 p.m. until 6 p.m. in Daniel F. O'Riley Funeral Home. There will be no services. Online condolences may be shared with the family at orileyfuneralhome.com.

To order memorial trees or send flowers to the family in memory of Gerald Wendell 'Jerry' Clark, please visit our flower store.