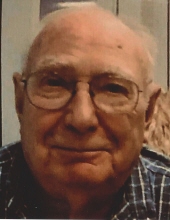 Harold S. Busald, 91, of Indianapolis, passed away peacefully on Wednesday, February 20, 2019. Born in Beech Grove on January 30, 1928, Harold was the son of the late Samuel and Theresa Busald. On May 6, 1950 he was united in marriage to Edna “JoAnn” (Webb) Busald and she survives.

Harold was a longtime member of St. Barnabas Catholic Church, but most recently attended St. Jude Catholic Church. He proudly served his country in the United States Navy during World War II. Harold continued to serve his community on the Perry Township Fire Department for many years serving as Fire Chief. He also worked as a machinist for Schweitzer Engineering for 35 years before retiring in 1989.

Along with his parents, Harold is also preceded in death by his two brothers, Raymond and Edward Busald; and his two sisters, Carolyn Pond and Ann Phillips.

Family and friends will gather to celebrate the life of Harold Busald from 11:00 a.m. until 1:00 p.m. on Monday, February 25, 2019 at St. Jude Catholic Church, 5353 McFarland Road, Indianapolis. Mass of Christian Burial will begin at 1:00 p.m. on Monday at the church. Burial will follow at Calvary Cemetery. In lieu of flowers, please consider making a donation to the American Alzheimer’s Association; envelopes will be provided. Final care and arrangements are entrusted to the Daniel F. O’Riley Funeral Home, 6107 S. East Street, Indianapolis. Visit www.OrileyFuneralHome.com where you may express online condolences to the Busald family.

To order memorial trees or send flowers to the family in memory of Harold S. Busald, please visit our flower store.