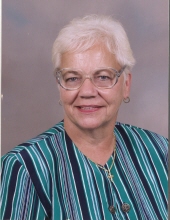 Helena Ann (Riegel) Hoff Noel, 85, passed away on Sunday, August 2, 2020 after a courageous battle with Parkinson’s Disease. Helena was born on September 8, 1934 in Indianapolis to the late Bernard George and Anna (Brewer) Riegel.

Helena attended St. Catherine of Siena grade school and spent a year studying at St. Mary of the Woods in Terre Haute, Indiana before attending St. Mary Academy in Indianapolis from which she graduated in 1952. Helena spent the majority of her professional years working for Trans World Airlines in different capacities, including being the first female Agent in Charge at Weir Cook Airport. Helena retired from Trans World Airlines after 40 years of dedication.

Helena loved music, studying vocal music in school, singing in the chorus of Starlight Musicals in the 1950’s, and always singing in church choirs wherever she lived. She continued cantoring and singing in her church choir until she left Florida in 2015. Helena had a very caring spirit and enjoyed volunteer work. She volunteered at Van Wezel Performing Arts Hall, Our Daily Bread- Soup Kitchen, and Mote Marine Laboratory & Aquarium all in Sarasota, Florida. Helena had 25 years of dedicated volunteer work at Mote Marine Laboratory & Aquarium.

Along with her parents, Helena was also preceded in death by her brothers, Bernard and Joseph Riegel; her sister, Dolores (Riegel) Keller; and her grandson, Nathaniel Brooking.

The Mass of Christian Burial will be celebrated on Friday, August 14, 2020 at 12:30 P.M. in St. Mark Catholic Church, 535 East Edgewood Avenue, Indianapolis. Calling will take place on Friday morning prior to mass from 10:00 A.M. to 12:00 P.M. in the O'Riley Funeral Home, 6107 South East Street, Indianapolis. Inurnment will follow the Mass on Friday in Calvary Cemetery.

In lieu of flowers, donations may be made to Mote Marine Laboratory & Aquarium, The Parkinson’s Foundation, The Institute of Quality Education Scholarship, or Our Daily Bread- Soup Kitchen; envelopes will be provided at the funeral home.

To order memorial trees or send flowers to the family in memory of Helena Ann (Riegel) Hoff Noel, please visit our flower store.