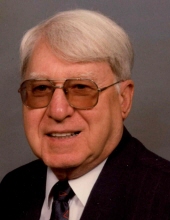 Herman F. Hagner, 89, of Indianapolis, passed away Friday, January 26, 2018. Born in Louisville, KY, Herman was the son of the late Herman and Ludmilla (Berner) Hagner. He was united in marriage to his loving wife, Margaret (Thornbury) Hagner and she preceded him in death in 2016.

Herman was a founding member of St. Jude Catholic Church where he enjoyed playing in the bridge club. He was a 4th Degree member of the Knights of Columbus Mater Dei Council #437. Herman worked as a service manager at Pitney Bowes for 33 years retiring in 1986. He proudly served his country in the United States Army during the Korean War.

Herman is also preceded in death by his siblings, Carl and Lee Hagner, and Rosa Swords.

Family and friends will gather to celebrate the life of Herman F. Hagner from 10:30 a.m. until Noon on Tuesday, January 30, 2018 at St. Jude Catholic Church, Indianapolis. The Mass of Christian Burial will be celebrated at Noon on Tuesday at the church. Burial will follow at Calvary Cemetery. Final care and arrangements are entrusted to the Daniel F. O’Riley Funeral Home, Indianapolis. Visit www.OrileyFuneralHome.com where you may express online condolences to the Hagner family.

To order memorial trees or send flowers to the family in memory of Herman F. Hagner, please visit our flower store.