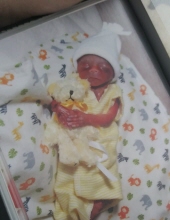 Holden Crue Henry Kinnaird, infant son of Taylor Nicole Kinnaird and Eston Charles Kiger of Indianapolis, passed away at 20 weeks and 1 day on Saturday, April 29, 2021 at St. Francis Hospital in Indianapolis. He lived peacefully in his mother and father’s arms for the 45 minutes he was on this earth before becoming one of God’s precious angels.

Up until April 29, 2021 Taylor experienced a very normal pregnancy, aside from the occasional bout with morning sickness. Holden always had a very strong heartbeat. Not only was Holden spoiled with love, but he was spoiled in selecting his mother’s diet; he did not like it when she ate two of her favorite things- pizza and ranch! Holden loved when mommy ate an Oreo McFlurry from McDonald’s; he had to have one nearly every day!

Holden had many adventures, but truly enjoyed his trip to Brown County spent hiking. Holden was happiest when mommy was walking; he would always fall asleep quickly. He liked to kick mommy all day while she was trying to work, but the minute she got home and could relax with dad, Holden was at peace. He loved to be next to his dad while he played video games.
Holden weighed 13 ounces and was 10 and ¾ inches long. He had his mommy’s chin, mouth, and nose, and he had his daddy’s ears, eyes, and long feet and hands. In his short time on this earth, he wore a smile the entire time he was in mommy’s arms, and he stared in wonder at his daddy while in his arms.

While Holden’s time on this earth was very brief with his early entrance, his parents are very thankful they were able to spend valuable moments with him. They are also thankful for early genetic testing that revealed he was a sweet boy so early on in their pregnancy. Although Holden will be greatly missed, his memory will forever remain in the hearts of every single person who loved him.

Friends and family will gather for the visitation on Wednesday, May 12, 2021 from 2:00 to 4:00 P.M. in the O’Riley Funeral Home, 6107 South East Street, Indianapolis. The memorial service to celebrate Holden’s life will begin on Wednesday in the funeral home at 4:00 P.M. Final care and cremation arrangements are entrusted to the O’Riley Funeral Home. In loving memory of Holden, please consider making a contribution to Love, Lucas at www.LoveLucas.org; envelopes for donations will also be available at the funeral home on Wednesday. Please visit www.ORileyFuneralHome.com to leave an online condolence for Holden’s family.

To order memorial trees or send flowers to the family in memory of Holden Crue Henry Kinnaird, please visit our flower store.