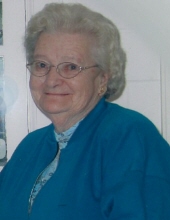 She married Walter Rode on May 15, 1943 in Beech Grove, IN at Holy Name Catholic Church, and they spent sixty three years together. They raised eight children, with a son and granddaughter being born on Irene’s birthday. She was a homemaker, spending many summers canning hundreds of quarts of fruits and vegetables to feed the large family.

Walter and Irene were founding members of St. Jude Catholic Church. She was a fantastic quilter, making numerous quilts for all her children and most of her grandchildren.

She was preceded in death by her husband; her son, John; son-in-law, Maynard McKinley; grandson, Michael McKinley; and great granddaughter, Amanda Lewis; as well as her parents and four brothers and four sisters.

She is survived by her children, sons Jim (Margie) of Whiteland IN, Joe (MaryRose) of Mooresville IN, Jerry (Debbie) of Brazil IN, and Jeff of Powell WY; her daughters, Joyce (Bob) Lewis, Joan McKinley, and Jayne (David) Chambliss all of Indianapolis; 15 grandchildren, and 33 great grandchildren; also two brothers, Joe and Leo (Joann) Wathen of Michigan.

Viewing will be held Monday, March 13, 2017, from 4-8 pm at St. Jude Catholic Church, 5353 McFarland Rd, Indianapolis, and Tuesday from 10-11 am followed by a Mass of Christian Burial at 11 am. Burial will be in Mt. Pleasant Cemetery, Greenwood, IN. Memorial contributions may be made to St. Jude Catholic Church. Funeral arrangements are being handled by the Daniel F. O'Riley Funeral Home. Online condolences may be shared with the family at orileyfuneralhome.com.

To order memorial trees or send flowers to the family in memory of Irene T. (Wathen) Rode, please visit our flower store.