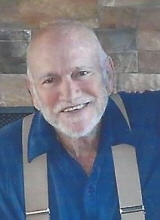 Jack Douglas Bartle, 80, of Indianapolis, passed away peacefully with family by his side on January 14, 2017. Jack was born on February 6, 1936 to the late Marvin and Neoma Bartle in Indianapolis, Indiana. He graduated from Broad Ripple High School and attended Butler University, where he played baseball. He worked for Chrysler for over 30 years. Jack was a very kind, loving, and giving man who loved spending time with family and friends. He enjoyed all sports, especially golf, bowling, tennis, and racquetball. He loved the challenges his grandsons gave him in ping pong. No, it was a challenge for them to beat him. He also loved teaching and playing chess with his grandsons and great grandchildren. He was an avid Pacers and Colts fan. Jack was preceded in death by his wife of 56 years, Clara Louise Bartle; brother, Barry Bartle; and his sister, Jean Shockey. He will be deeply missed by his two daughters, Darla (Tyrone) Campbell and Marva Butler, also known as Nene; six grandsons, Christopher (Angie) Hadley, Jesse Spencer, Jeremiah Butler, Joshua Butler, Michael (Geri-Lynn) Campbell, and Matthew Campbell; five great grandchildren, Dayton, Dawson, Maddox, Gabriella and Nora; brother, Wally Bartle (Jane); several cousins; nieces; nephews; and brothers and sisters in law. Services will be held on Saturday, January 21, 2017 at 2 p.m. with visitation from 12 noon until 2 p.m. at Daniel F. O’Riley Funeral Home, 6107 S. East Street, Indianapolis, IN 46227. Burial will be in Greenwood Cemetery. Memorial contributions may be made to the National Kidney Foundation Finance Department, 30 East 33rd Street, New York, NY 10016. Online condolences may be shared with the family at orileyfuneralhome.com.

To order memorial trees or send flowers to the family in memory of Jack Douglas Bartle, please visit our flower store.