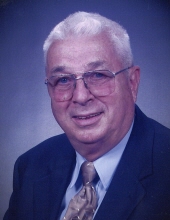 James R. “Jim” Huser, 93, of Indianapolis, passed away on August 20, 2022, at the Franciscan Hospice House surrounded by his family. He was born in Indianapolis on July 11, 1929, to the late Joseph N. and Carolyn (Lauth) Huser. On April 30, 1949, Jim wed Jeanne A. Huesing in St. Philip Neri Catholic Church. The pair shared 73 years of wedded bliss and created a beautiful family.

Jim completed grade school at Little Flower and went on to be a 1947 graduate of Cathedral High School. He attended Purdue Extension in Indianapolis. A talented tool and die-maker, Jim was the co-owner of Universal Machine and Tool Works for 22 years, retiring in 1985.

His mechanically inclined mind wasn’t limited to his career, he was generous with his time and skill to those he knew and loved. Jim was the first to be there if you needed something repaired or built. An advocate for those who were limited or needed a second chance, Jim hired those who were deaf and came from stints in prison. He had a truly generous heart for those who were vulnerable.

A member of Holy Name Catholic Church since 1953, Jim was passionate about the Right to Life and his service to his church. Jim was named the Holy Name Men’s Club Man of The Year in 2005. He was a Fourth-Degree Knight in the Knights of Columbus, Fatima Council. Jim also served on the Lay Board of Advisory for St. Paul’s Hermitage for many years. He was incredibly humble, accepting, generous, and loving; these special traits about him will live on in his greatest legacy- his family.

Along with his parents, Jim was preceded in death by his brothers, Joseph, John, and Raymond Huser; a sister, Dorothy Rose Nelson; daughter-in-law, Julie Huser; and grandchildren, Michael, Allie, and John John; and several great-grandchildren lost in miscarriages.

Jim’s Life Celebration® visitation will be on Tuesday, August 23, 2022, from 4:00 to 8:00 PM in Holy Name Catholic Church, 89 North 17th Avenue, Beech Grove, Indiana 46107. The Mass of Christian Burial will be celebrated by Father Bob Robeson on Wednesday, August 24, 2022, at 10:30 AM in Holy Name Catholic Church; an additional hour of visitation will begin at 9:30 AM prior to the celebration of Mass. Burial will follow in Calvary Cemetery, Indianapolis. In lieu of flowers, memorial contributions can be made to Holy Name Catholic Church or The Indiana Right to Life Campaign; envelopes will be provided at the church. To sign the online guest registry or share a favorite memory of Jim, please visit www.ORileyBranson.com.

To order memorial trees or send flowers to the family in memory of James R. "Jim" Huser, please visit our flower store.