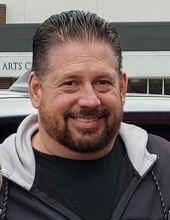 James “Todd” Neely, 53, Indianapolis, passed away peacefully at his residence on December 22, 2021. Todd was born in Indianapolis on March 7, 1968. He was adopted at a young age by Donna (Loyd) and Milton Gossett who both survive. Todd was a graduate of Broad Ripple High School in the class of 1986.

After high school, Todd pursued a career in HVAC services for over 30 years, 15 of those years he was employed by Carrier Commercial Services. Todd retired in 2010 from McNeely’s Heating and Cooling.

When not spending time with family and friends, Todd could be found riding his motorcycle or working on it. A natural born mechanic, he loved tinkering with cars and motorcycles. A lover of nature, Todd enjoyed taking leisurely walks in Southeast Way Park. Todd had a fire pit in his backyard and loved to build fires on cool autumn nights. Playing video games, collecting guns, and working towards a healthier lifestyle were important to Todd. Above all, He absolutely adored his two grandchildren, Jaeden and Oakley, and lived to spoil them.

Todd will be remembered for his strong-willed and outspoken personality. You never had to question where you stood with him, and you always knew how he felt about you. Todd never left anything unsaid. His unique sense of humor and witty jokes will be greatly missed by all of those who love him.

Todd was preceded in death by his beloved daughter, Stephanie D. Neely; Stephanie’s fiancé and the father of Todd’s grandson, Matt Rynard survives, along with his grandson, Jaeden Luis-Paul Mendez-Rynard.
Other survivors include both of his parents, Donna and Milton Gossett; his son, Christopher T. Neely and daughter-in-law, Renee Gilligan, their daughter, Oakley Maeve Gilligan; his sister, Tiffany Neely; a host of nieces, nephews, extended family members, and friends.

To honor Todd’s wishes, he will be cremated. A service to celebrate Todd’s life will be held on Wednesday, December 29, 2021, at 6:00 PM in O’Riley Funeral Home, 6107 South East Street, Indianapolis, Indiana 46227. The visitation will be held prior to the celebration of life from 3:00 to 6:00 PM on Wednesday, December 29, 2021, in the funeral home. O’Riley Funeral Home is serving the family. Please visit www.ORileyFuneralHome.com to leave an online condolence for Todd’s family.

To order memorial trees or send flowers to the family in memory of James "Todd" Neely, please visit our flower store.